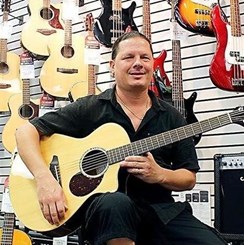 Get to know John Jewer

With more than 20 years of teaching at Music & Arts in Park Plaza in Severna Park, the Pasadena native has carved out a rewarding and accomplished career. Rick is an accomplished teacher, and has also helped lead multiple students to professional careers in music, including guitarists Billy Martin of Good Charlotte and Dru Decaro, who has performed with Miguel, John Legend and Faith Hill among others

Known for his guitar prowess, Jewer played drums and bass before he received his first guitar, a Gibson Les Paul, when he was in middle school. Since then, Rick has carved out a niche for both performance and education, teaching thousands of students over his many years of teaching.