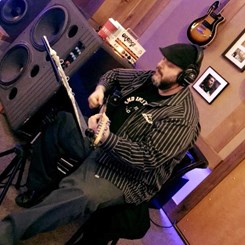 Get to know Michael Cosentino

Michael Cosentino is a classically trained guitarist with 20 years of experience in a variety of musical styles.  He started his studies under John Mcclellan at the St. Louis Symphony Music School and continued to earn a BM of music performance from the Cleveland Institute of Music where he studied with John Holmquist and Grammy award winner Jason Vieaux. He has also performed in master classes with Ben Verdery, Stantley Yates, William Kanengiser, Carlos Barbosa Lima, Scott Tenennt, Antigoni Goni, Elena Papandreou, Steven Aaron, and David Russell. Michael has also performed throughout most of the United States with numerous rock bands since 1993 including 2 tours of the southern states with the band Figure in support of the “Carn ep” as an opening act for the Abbriged records legends Blueprint. During this time Figure shared the stage with many post punk and emo trailblazers including The Get up Kids, Cap’n Jazz, Kerosine 454, Lifetime, The Bouncing Souls, The Swinging Utters, Endpoint, The Warmers, The Make up, Boys Life and Shiner. Currently he is playing with the band T.O.S featuring a member of the classic rock legends Head East and can be heard on their recent albums “Weathered” and “Resurrected Dream.”
Michael Cosentino teaches at:
West County MO
1236 Town and Country Crossing Dr
Town And Country, MO 63017
(636) 527-7354
Get Directions More Details
Crestwood MO
9189 Watson Rd
Saint Louis, MO 63126
(314) 968-5459
Get Directions More Details
Skip link