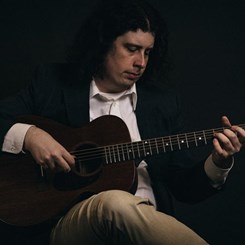 Patrick Carr
Music Teacher, Expert
Location: Wilmington, NC
Speaks: English
Instructs: Bass Guitar, Guitar, Mandolin, Ukulele
Education: Bachelor of Arts from University of North Carolina Wilmington
Performance Experience: Around 10 years
Teaching Experience: 4 years
Teaching Philosophy: I truly believe every student has their own voice on the guitar and my goal is to instill a love of the guitar to unlock their potential. My teaching style puts a heavy emphasis on technique, practicality, creativity, and preparation for real life performance situations.
Book Now

Get to know Patrick Carr

With over 15 years experience playing guitar, Patrick brings a wealth of practical knowledge along with a deep love of the instrument to all of his students.

A Wilmington native, Patrick has a passion for the guitar that began as a teenager when he borrowed his dad’s copy of Led Zeppelin IV. Shortly afterward, he received his first guitar as a 16th birthday present, and he began taking guitar lessons under Terry Godwin while practicing 2-3 hours per day. Patrick expanded his musical talents by learning to play bass, ukulele, and mandolin as well. He attended University of North Carolina Wilmington, where he earned a B.A. in English with teacher licensure. Throughout his years of experience, Patrick has been a part of many bands and music projects in a variety of genres, including blues/jazz rock, metal, Christian rock, and alternative rock. Currently, his focus is on his solo folk singer-songwriter project, which has been chosen for music festivals and featured on local radio stations several times.