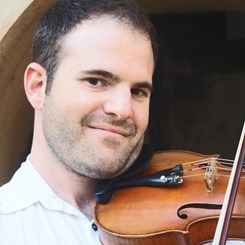 Get to know Rafe Goldman

Rafe Goldman, a native of New York began his violin studies at the age of eight. While under the instruction of Doris Rothenberg, he had the opportunity to perform at Carnegie Hall in New York City for the anniversary of famed music pedagogue, Shinichi Suzuki.
Rafe then moved to Charleston, South Carolina and during his high school years spent summers participating in music programs in New England, and also performed with Charleston Youth Symphony and South Carolina All-State orchestra. He also studied violin under the tutelage of acclaimed performer and violin professor, Lee Chin Siow, at the College of Charleston.
He performs regularly with the Hilton Head Symphony, and also as a substitute with various orchestras, including the Beaufort Symphony, Savannah Orchestra, and many others. Rafe has participated in the prestigious Chautauqua Music Festival and Brevard Music Festival. In 2010, he had the opportunity of performing in a string quartet at the Slovakian Embassy in Washington, D.C. Rafe has performed in masterclasses by renowned faculty Roland and Almita Vamos, and Ilya Kaler.  A number of his students have been accepted into All-County, All-State Orchestra, and Charleston County School of the Arts.
Rafe hold degrees in Arts Management and Music Performance from the College of Charleston.
Rafe Goldman teaches at:
Charleston SC
975 Savannah Highway Suite R1
Charleston, SC 29407
(843) 852-0900
Get Directions More Details
Skip link