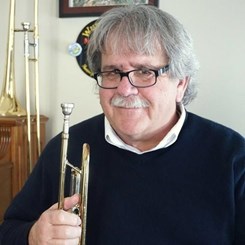 Steve began his musical career as a 4th grader at Connecticut Park Elementary School in Wheaton Maryland. Over the next several years, his love of music grew steadily. He continued learning and playing throughout junior and senior high school. Before very long, he was playing the entire family of brass instruments.

During his teens and early twenties, Steve joined several bands in the Maryland/DC area, eventually becoming a busy and active part of the Washington metro area rock and roll scene of the late 1960’s. It was definitely a great time to be a musician.

During this time, Steve also continued his formal musical training at Montgomery College and began sharing his love of brass instruments with young music students. During the late 1960s and early 1970s, Steve worked under the tutelage of a beloved musical mentor.  Mr. Johnny Smith, a legend in the local music scene of the day, owned and operated an amazing music studio in Wheaton Maryland, Smith’s Drum Shop. The studio became Steve’s musical home for several years.

Sadly, Smith’s Drum Shop and most of the clubs and venues where Steve played have long since vanished. As they were disappearing, Steve’s life was also changing. In 1973 he got married, and two years later became a father. Over the next three decades, Steve and his wife, Shelley, raised five wonderful children, all of whom inherited his love of music. Eventually, Steve’s family would grow even larger and now includes three daughters-in-law, one son-in-law, and six beautiful grandchildren.

While he was raising his family and pursuing a career in the auto business, Steve also continued to play with a several local musical groups, including the Frederick Symphony Orchestra. When John Slezak, the former band director at Frederick High School, founded the Spires Brass Band in 1994, Steve became a charter member. For the past 26 years, Steve has had the honor of occupying several chairs in that band. Currently he plays 1st tenor horn with the Spires.

During his busy work and family-raising years, Steve also volunteered with Boy Scout Troop 1070 in Walkersville Maryland. For several years, he served as the troop’s musical director and music merit badge counsellor. While two of his sons were busy working toward the rank of Eagle Scout, Steve and the small but enthusiastic Boy Scout Band spent many hours entertaining local senior citizens and community groups in the Frederick area. The Troop 1070 Band provided many young musicians the opportunity to develop their ensemble playing skills while entertaining many happy audiences.

After his children were grown and starting families of their own, Steve retired from the auto business and decided to fully dedicate himself to music. Since 2015, while continuing as an active member of the Spires Band and playing with small ensembles from time to time, Steve has also been providing brass instruction to students of all ages and skill levels.

Steve is a passionate and dedicated teacher, working hard to create interesting, varied, and personalized lesson plans adapted to each student’s unique skill level and interests. While never overlooking the basic exercises that are vital to mastering a musical instrument, Steve also incorporates pieces selected by his students into the curriculum. Steve also believes in the importance of playing duets with his students. While learning to play duets, students develop listening skills and learn how to play in tune and begin to master the art of playing in a musical ensemble.