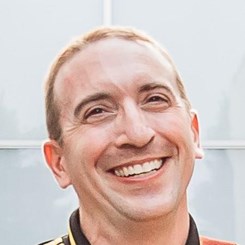 Get to know Andrew Kasab

Andrew Kasab is an American fingerstyle guitarist, harp guitarist and singer-songwriter. He is known for combining traditional and contemporary techniques, energetic performances, arrangements of modern works for the guitar and harp guitar and occasionally plays harmonica and ukulele.

He has been performing for over 30 years at music halls, events, festivals, restaurants and other venues, self released 12 albums of solo material, and plays multiple styles including rock, funk, folk, blues, country, bluegrass, jazz, American fingerstyle, American primitive and contemporary acoustic styles.

"“Big stages are fun,”says string instrumentalist Andrew Kasab, “but I love the intimate, right-next-to-your-audience shows. There’s nothing quite like making jokes with folks while entertaining the pants off them.” “I [strive] to craft music along the lines of influencing artists who, I believe, were imitating other instruments and reimagining them on a bass, guitar, organ, etc,” he says. “That, to me, is an essential element to the guitar.”

“Fish” features a range of genre influences and finger-picking techniques. On it, Kasab tried to capture the most comprehensive sampling of instrumental material in one album."

"Raleigh's Andrew Kasab plays a curious instrument: the harp guitar. His twelve-string acoustic apparatus looks like something snatched from a Hieronymous Bosch painting, but in Kasab's hands, it delivers the most delightful sounds. On 2015's "Fish," Kasab tackles a surprisingly wide range of styles over twenty-four tracks, from the opening, American Primitive-inspired "Ire" to the snappy, aptly titled "D St Funk." Kasab's music is gentle enough that it works well as a background complement….but do give yourself the favor of giving him your rapt attention instead"