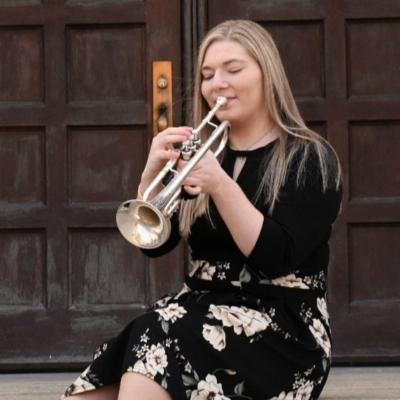 Claire Dollison
Music Teacher, Expert
Location: Columbus, OH
Speaks: English
Instructs: Trumpet
Education: Bachelor of Music at Capital University
Performance Experience: Honor bands, OMEA events, recitals, gigs, and so much more.
Teaching Experience: Taught private lessons since 2016
Teaching Philosophy: Anyone can be a musician if they want to, it just takes hard work and dedication. Being a musician is one thing that so many people have in common despite their background; it's a time we can all come together and do something we love.
Book Now

Get to know Claire Dollison

Claire Dollison is a musician who is primarily known as a trumpet artist who is currently attending Capital University as a music education major. Claire has been involved with music, playing trumpet, and many other instruments including piano, flute, and French horn, since 2008. She has accomplished many things throughout her career. She has been invited to play in many honor bands much like the Ohio State University Honor Band, Wright State University Tri-State Honor Band, and the Ohio University Honor Band Festival. Claire has done numerous amounts of performances as well through ensembles and solo playing with things like recitals and OMEA contest, receiving superior ratings on class A solos. Claire has also booked multiple gigs ranging from things like pit orchestras for musicals, churches, etc. Throughout Claire’s career, she has won many awards in school ranging from Most Outstanding Brass Player, Most Improved, and also school scholarships on behalf of her playing.

Claire Dollison teaches at:
Reynoldsburg OH
5999 E Main St
Columbus, OH 43213
(614) 863-3200
Get Directions More Details
Skip link
With over 150 locations nationwide, Music & Arts is the nation’s leading provider of private music lessons, band and orchestra instrument sales, rentals and repairs. Our remarkable story of growth has everything to do with the countless unshakable relationships we’ve formed with students, parents, music educators and musicians of every stripe in the local communities we serve across the country. Since opening our first store back in 1952, we’ve been owned and operated by the same family, and there’s nothing we do as a company without our values in mind. For whatever you’re doing in music, we’re here to help. We hope you visit our Columbus location soon! Our friendly staff can’t wait to meet you.