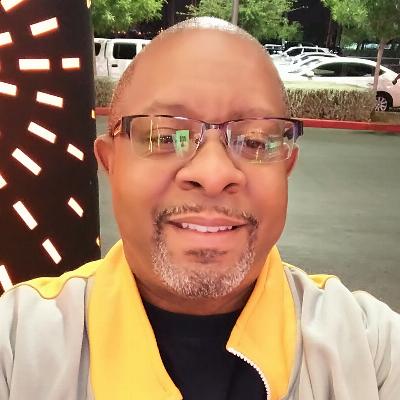 Get to know Derrick Bell

Derrick’s goal is to help build your imagination, develop your patience and confidence. Engage your mind, empower, motivate, promote discipline, inspire, as you mesmerize others, learning how to create art while giving yourself and others joy. Music IS life changing!

Derrick was born in the mid 1960’s (he doesn’t want to give away his age) in Los Angeles, CA. At age six (6) Derrick’s parents started him in private lessons studying Classical Piano. Derrick did well in his study of the piano but his first love was the drums, so while in Elementary School his parents also allowed him to take drums lessons.

Derrick continued to study both, playing in recitals, Church, Marching and Jazz Band. He attended Band Camps and taught the Choir songs at Washington Preparatory HS and (upon Graduating) he earned the Herb Albert Music Scholarship. Derrick received other awards like Outstanding Instrumentalist and Outstanding Vocal Ensemble Musician. But even more inspiring to him was the Award he received from his classmates and peers as MOST TALENTED!

After High School, Derrick continued to study music (as well as Radio Broadcasting and Studio Recording) at Los Angeles City and Citrus College. Derrick earned his Certificate from Sounds Masters in Hollywood. Derrick is familiar with a variety of analog and digital mixers and other types of equipment which involve audio. If Derrick doesn’t know, he probably knows someone who does.

Since High School, Derrick has written close to 50 songs of various styles. He has worked with a few known artists in the industry like Chaka Khan, El Debarge, Ethan Farmer, Snarky Puppy (just to name a few).

He started his own company in the 90’s called Native Entertainment which provides various aspects of entertainment (mostly artist) for private events.

Derrick LOVES all types of music and has been the Director of Music at a few prominent Churches like New Revelation in Pasadena and Mt. Sanai in Los Angeles. Derrick also has a cover band called Diversity Band of So Cal – which has been together over 25 years. They recorded a live CD called “Quest for Excellence” and perform Contemporary Jazz, R&B, Blues, Classic Rock and Latin songs at various locations around southern California.

Give Derrick 6 months and see, feel and experience the magic in making music!

Derrick Bell teaches at:
San Dimas CA
842 W Arrow Hwy
San Dimas, CA 91773
(909) 599-0325
Get Directions More Details
Glendora CA
848 S Grand Ave
Glendora, CA 91740
(626) 963-0263
Get Directions More Details
Skip link
With over 150 locations nationwide, Music & Arts is the nation’s leading provider of private music lessons, band and orchestra instrument sales, rentals and repairs. Our remarkable story of growth has everything to do with the countless unshakable relationships we’ve formed with students, parents, music educators and musicians of every stripe in the local communities we serve across the country. Since opening our first store back in 1952, we’ve been owned and operated by the same family, and there’s nothing we do as a company without our values in mind. For whatever you’re doing in music, we’re here to help. We hope you visit our San Dimas location soon! Our friendly staff can’t wait to meet you.