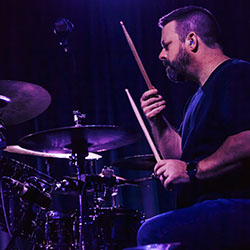 Get to know Greg Seale

Greg Seale wasn’t born with drumsticks in his hands, but he didn’t wait long to grab some. At the age of four, after his relentless banging on pots, pans, buckets, beds and anything else he thought made a cool noise, his parents bought him his first drum set, a paper-headed beauty from Sears. Soon after, he began taking piano lessons and moved from paper drums to real drums and joined band in school. In high school, he discovered a love for drumline and decided to go to University of North Texas.

While at North Texas, he played in the National Champion Drumline, world famous lab bands, orchestra, steel drum band, and percussion ensemble. He also studied Cuban, Brazilian, and African drumming. Along the way, playing drum set became the focus and he played every genre he could find, settling mostly on rock, funk, and jazz.

Upon graduating with a Bachelors Degree in Music Performance, Greg taught in the DFW area for various school districts for a few years. In 1999, Greg was asked to join Blast! After a run on Broadway, Greg joined the touring cast and toured the US and Japan.  After 4 years, Greg left the show and settled in Austin.

Once in Austin, Greg was asked to join numerous local party bands and was a busy member of several bands, and backed various solo artists, playing locally and touring for the next several years. During this time, he continued to teach private lessons to students of all ages.

While he has limited his playing schedule as of late, his love for teaching continues to grow. He believes in a solid foundation in technique and music theory that helps his students learn how to play the music they love.

Greg does his best to make lessons fun and informative. Most of all, it is important to know that each individual student’s goals is the most important thing. Greg will strive to help you meet your musical goals while having some fun along the way.