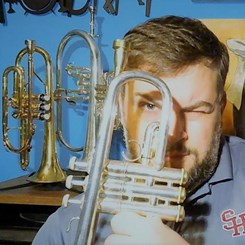 Get to know Jameson Forsythe

Jameson has been helping musical youngsters grow since 2002. From 2003-2008, he attended the University of Connecticut, where he studied trumpet under James Ackley and Charles Schlueter. In 2008, he took on the position of Music Director for the Square Foot Theatre, where he would act as vocal coach, conductor, orchestrator, 1st trumpet, and (occasionally) on-stage talent until 2013, performing 5 musicals a year with the company. Throughout the state of Connecticut, Jameson has shared his skills with over 100 casts and companies.

As an educator, Jameson’s students have placed in top audition only ensembles across the state, as well as won slots at premier colleges and universities, where many have continued their musical educations. His main focus is on developing critical skills to set students up for success and enjoyment at whatever level they wish to perform at, as well as foster a sense of self-reliance that will transcend their musical studies to all aspects of their lives. Jameson structures his private studio similarly to what can be found on college campuses across the country, including frequent masterclasses, exclusive studio classes for members of his studio, and studio chamber ensembles where students really begin to learn how to musically converse.

Jameson looks forward to helping you reach whatever goals you may have in a lighthearted, fun environment that fosters growth and a passion for music.