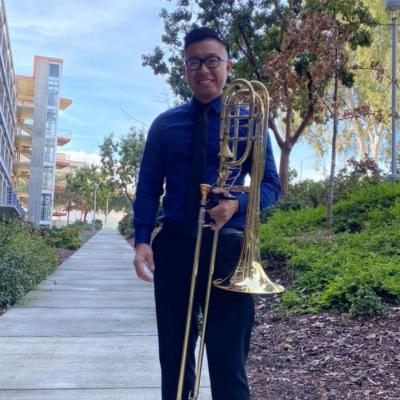 Kevin Truong
Music Teacher, Master
Location: San Dimas, CA
Speaks: English
Instructs: Baritone, Trombone, Trumpet
Education: University of Southern California Master of Music (2022), California State Polytechnic University, Pomona Bachelor of Music (2020)
Performance Experience: 7 years
Teaching Experience: 5 years
Teaching Philosophy: I believe that in a learning environment where all people are unique and creating a safe, productive, and friendly learning environment where myself students can grow as musicians and people. I believe in my students up for meeting their full potential in their own musical journey and goals.
Book Now

Get to know Kevin Truong

Kevin Truong is a trombonist in Southern California, where he is currently pursuing a Master of Music degree in Music Performance at the USC Thornton School of Music. Kevin completed his Bachelor of Music in Music Performance at California State Polytechnic University, Pomona. Kevin’s primary teachers include Dr. Lori Stuntz, Terry Cravens of the LA Opera, and James Miller of the Los Angeles Philharmonic. Other mentors that have had a profound impact on his career are Brian Hecht and John Van Houten.

His performing experience includes marching Euphonium at Pacific Crest in 2015 and 2016, receiving the Brass Outstanding Performer award in 2016. Kevin then continued his Drum Corps career, marching Baritone with the Santa Clara Vanguard in 2018 for his age-out, earning a gold medal at DCI Finals. Kevin was also named winner of the Cal Poly Pomona Philharmonic Orchestra’s Concerto Competition in 2019 and performed as a soloist with the orchestra.

Kevin Truong teaches at:
San Dimas CA
842 W Arrow Hwy
San Dimas, CA 91773
(909) 599-0325
Get Directions More Details
Skip link
With over 150 locations nationwide, Music & Arts is the nation’s leading provider of private music lessons, band and orchestra instrument sales, rentals and repairs. Our remarkable story of growth has everything to do with the countless unshakable relationships we’ve formed with students, parents, music educators and musicians of every stripe in the local communities we serve across the country. Since opening our first store back in 1952, we’ve been owned and operated by the same family, and there’s nothing we do as a company without our values in mind. For whatever you’re doing in music, we’re here to help. We hope you visit our San Dimas location soon! Our friendly staff can’t wait to meet you.