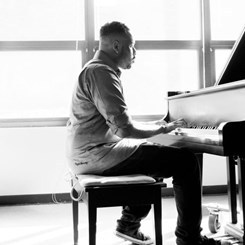 Get to know Marcus McPherson

Marcus McPherson is a talented musician who has performed for several years in several different genres of music, and is a graduate from Lander University, earning a Bachelor’s degree in Music Performance. McPherson grew up in a house with jazz music, self-teaching himself to play piano by ear at the age of 12. At age 16, he started to take lessons at at the Koger Center of the Arts in Columbia, SC. During these two years, he picked up music from the contemporary, classical and romantic periods as well as some jazz standards. While studying, he was accepted to a few music programs for the two summers, one of the programs sponsored by Brevard College in Brevard, NC. After graduating high school, at age 17, he enrolled into Lander University, based on scholarship. While in college, he excelled in the study of Jazz music, performing music written by Chick Corea, Duke Ellington, Hiromi Uehara and Thelonius Monk. After graduating Lander University, he plans to further his education with earning a Master’s Degree for compositions and conducting music.
Marcus McPherson teaches at:
Fairfield
1863 Post Road
Fairfield, CT 06824
(203) 255-2881
Get Directions More Details
Westport CT
413 Post Road East
Westport, CT 06880
(203) 221-1407
Get Directions More Details
Skip link