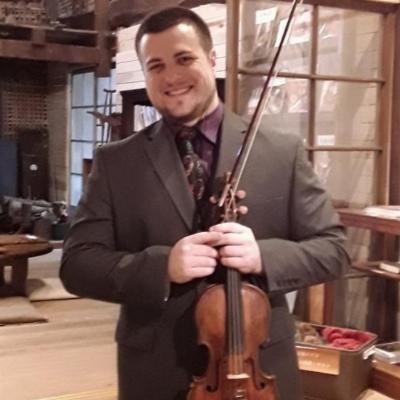 Get to know Matt Seivert

Matthew has been making music almost since birth, with a passion for singing that he quickly started experimenting with.

In the 5th grade, he picked up his first instrument: the violin.

The potential was obvious to his teacher, who recommended lessons very soon.

Matthew went on to study music performance, focusing on both voice and violin, for his Bachelor’s Degree at the liberal arts institution Hastings College (NE).

While working on his undergraduate, he began studying piano seriously and added the viola to his growing list of instruments as well.

With nearly two decades of experience playing the violin (11 of those years with dedicated private instruction), he has participated in many ensembles and performed for various events.

Though his ability to improvise was fostered through praise band at his church youth group services and learning from a jazz advocate; Matthew began focusing primarily on classical music in the 7th grade.

He has played in orchestras, chamber ensembles, string quartets, and as a soloist; with gigs ranging from full “dress black” concerts to weddings or other private functions by request.

He was schooled privately in the Suzuki Method of learning [on violin], focused on learning by ear and repetition, with an emphasis on parental involvement as the student progresses; adding music theory knowledge from orchestra class and his activities as a music major.

Matthew was a two-time All-State Orchestra and All-State Choir participant, with the honor of being the first ever from his high school to qualify to both ensembles in the same academic year.

Additionally, he was selected to local honor ensembles almost every year of his secondary schooling career.

Earning spots in several semi-professional ensembles has been a privilege of hard work over the years.

Mr. Seivert (don’t call him that too much, it makes him feel old!) enjoys making harmony on every instrument he has played proficiently.

This includes singing with many groups that specialize in harmony.

Other hobbies include creative writing, sports [mostly watching them at this stage], theater, and reading.

Matt Seivert teaches at:
Lone Tree CO
8475 S Yosemite St Suite B
Lone Tree, CO 80124
(303) 799-1253
Get Directions More Details
Skip link
With over 150 locations nationwide, Music & Arts is the nation’s leading provider of private music lessons, band and orchestra instrument sales, rentals and repairs. Our remarkable story of growth has everything to do with the countless unshakable relationships we’ve formed with students, parents, music educators and musicians of every stripe in the local communities we serve across the country. Since opening our first store back in 1952, we’ve been owned and operated by the same family, and there’s nothing we do as a company without our values in mind. For whatever you’re doing in music, we’re here to help. We hope you visit our Lone Tree location soon! Our friendly staff can’t wait to meet you.