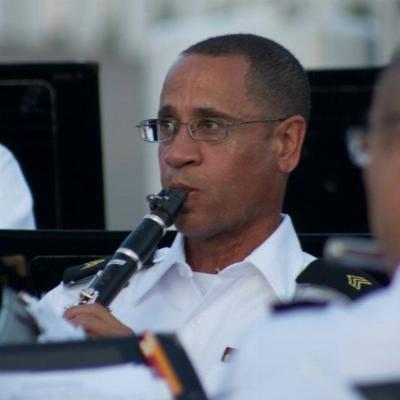 Get to know Ron Vazquez

Ronald has been a member of the Conservatory of Music of Puerto Rico Symphony Orchestra, Camerata Puertorriqueña Chamber Orchestra, Piacere Wind Quintet, Puerto Rico's Mayormente Mozart Festival Orchestra, Puerto Rico State Band, and he has also appeared with the Puerto Rico Symphony Orchestra. Mr. Vazquez has performed many recitals in Puerto Rico, Hawaii, Washington, D.C., New York, and Maryland. His former teachers include Kathleen Jones, Genesio Riboldi, Jose Velazquez, Michael Rusinek, and Dr. Cecil Gold.  Mr. Vazquez was also a clarinet and saxophone instructor at the Conservatory of Music of Puerto Rico continuing education program and a teacher supervisor/substitute for a special band training program.  He performed as a member of many contemporary music groups as a saxophone instrumentalist.

In 1989, after many years as a free-lance clarinetist and saxophonist, Mr. Vazquez joined the U.S. Navy.  After completing basic training, Mr. Vazquez attended the Armed Forces School of Music in Norfolk, Virginia.  After completing the Armed Forces musicians’ training, his first assignment was the U.S. Navy Pacific Fleet Band, in Pearl Harbor, Hawaii, where he performed as a clarinetist in the wind quintet, the concert, ceremonial, and marching bands and as a saxophonist in the jazz and show bands.  His next assignment was the U.S. Naval Academy Band in Annapolis, Maryland, where he reported for duty in 1991. His duties in this band included clarinetist in the wind ensemble and ceremonial band, saxophonist in the marching band and Recording and Sound Reinforcement Engineer for the wind and jazz ensembles and the band's recital series.

Mr. Vazquez authored and published "A Book for the Clarinet Reed-Maker," an illustrated single reed-making method for both clarinet and saxophone.  He was also a contributor-writer for the International Clarinet Association journal, "The Clarinet."  Ronald is also pursuing a Doctor of Musical Arts degree in clarinet performance at the University of Maryland at College Park. Some of his affiliations include the International Clarinet Association.

After leaving the US Navy in 1999, Ronald made a career change and is now an IT professional.  At present, Ronald works for GRSi where his title is Senior Storage Engineer on contract with NHLBI.  He also stays musically active as a member 257th Army Band since 2007.