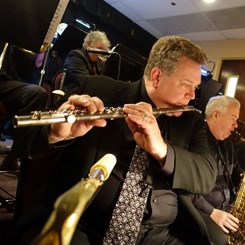 Get to know Scott Paretti

Scott was born and raised in New Orleans. At the University of New Orleans from 1981-1984, Scott played in the concert band, wind ensemble, marching band, jazz band and the "All That Jazz" show band. From 1984-1995, he was a full-time musician in the New Orleans area. Scott has had the privilege of sharing the stage with Huey Lewis and Aaron Neville, and was a regular performer at the New Orleans Jazz and Heritage Festival. Scott has played dixieland music in the New Orleans French Quarter and Mardi Gras parades, was part of the New Orleans contingent that performed in Philadelphia during Hands Across America, and performed at the New Orleans House of Blues for the New Orleans Artists Against Hunger and Homelessness. He has played the national anthem for the N.B.A. New Orleans Hornets (now the Pelicans) and the Canadian national anthem for the Gwinnett (now Atlanta) Gladiators. Scott and his family came to the Atlanta area in the spring of 2006 after Hurricane Katrina, and currently reside in Dacula. Scott has played on-and-off with several bands in the Atlanta area, including Capitol City Express, Metro Jazz Club, Leonard Blush and The T-Tones. Scott is also a member of the music ministry at North Metro Baptist Church in Lawrenceville. Scott has been teaching regularly in the Gwinnett County area since 2008.
Scott Paretti teaches at:
Snellville GA
1905 Scenic Highway N Suite 610
Snellville, GA 30078
(770) 982-0822
Get Directions More Details
Skip link