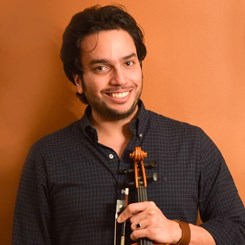 Sepehrdad was born in Iran. He began playing the violin at the age of 9 despite the difficulties to study music in Iran. Prior to beginning of the Violin classes, he started with sight singing and ear training at age of 5 for three years. He started his musical journey by studying violin under Iranian and classical instructors. He also plays traditional Iranian music on the Violin, and Kamancheh (Iranian instrument). He has proper knowledge of the violin’s mechanics, general musical and repertoire knowledge.

Sepehrdad has developed his own style by bringing together classical orchestration and performance techniques with traditional Iranian music. Throughout his professional career, he has collaborated with numerous prestigious Persian ensembles such as Iranian National Orchestra. He added the Iranian music to the school curriculum and started teaching for interested students. Sepehrdad has participated in several concerts including Kennedy Center, radio, TV shows, and festivals.

Sepehrdad strives to teach his students at the level that was present in his education. He finds this works best due to the rigor of course, because students become devoted to the fundamentals of music. While it is a path that is extremely difficult, it makes students appreciate the music they are playing at a deeper level of understanding. He believes that any student with the proper foundation can become great with their instrument of choice, and he aims to make violin students great with their selection.