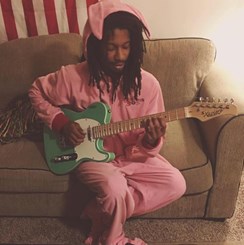 Timothy C
Music Teacher, Master
Location: Yorktown, VA
Speaks: English
Instructs: Bass Guitar, Guitar, Mandolin, Ukulele
Education: Licensed Songwriter, Endorsed by Konony Kheen, Liscense to Shred awarded by Ryan Knight from Black Dhalia Murder
Performance Experience: Timothy's first professional performance was in 2010 with local rock band "4 Year Hostage". Later, he formed "Jet Fighter Kaleidoscope" and performed all over VA for 3-4yrs earning nominations by VEER magazine. In 2014 he left VA to pursue a career in songwriting and landed a job as a contracted songwriter in Biloxi, MS. After completing his contract, he moved back to VA and performed in a duo called "Two If By Sea" and played over 300 gigs in the tristate area until 2020.
Teaching Experience: 10 years
Teaching Philosophy: Timothy firmly believes that music, like many other art forms is a form of expression and in order to properly express ourselves we must learn the proper technique and acquire the proper tools to translate our feelings and the ethos of ourselves to our instruments.
Book Now

Get to know Timothy C

Timothy's musical journey began during his senior year in highschool by taking piano lessons and teaching himself guitar. He then was lucky enough to take guitar lessons under the tutelage of David Davidson, the guitarist and frontman for popular metal band Revocation. Timothy has fronted several bands himself, traveled the lower east coast playing music, and has been a signed artist under the major Mississippi-based label AMS. Now he spends his time practicing and learning new instruments as well as writing original music.
Timothy C teaches at:
Yorktown VA
209 Village Ave Suite I
Yorktown, VA 23693
(757) 988-3970
Get Directions More Details
Skip link