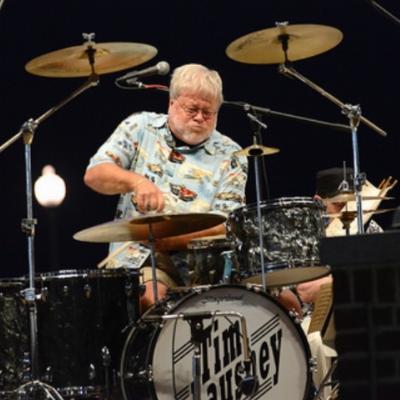 Get to know Timothy Laushey

Born in Lancaster PA, Tim's family moved to Wilmington when he was 10 to be closer to the AI DuPont institute. His brother was born with spina bifida, and at that time AI was the only place that could help his brother.

Started playing the drums at 10 years old. Studied with Wilmington legend Ralph Razze. He did so well with his lessons that 6 years later, at 16, Tim started teaching at the Drum Shop in Wilmington.

After a very successful music education at Conrad High School and the Wilmington Music school, Tim earned a theatre arts degree at the Philadelphia Drama Workshop Studio, and then attended Berklee Music School.

Tim started playing professionally at 21 years of age. He was the drummer on Al Albert's show case on channel 6 in Philadelphia for 11 years. He continues today playing for many top entertainers. Over his career he has been in the orchestras of, Jimmy Dorsey, Bob Crosby, Sammy Kaye, Warren Covington, and many more. Played and conducted for many acts, Julius LaRosa, The Four Aces, Dorothy Lamour, Patti Andrews, Morey Amsterdam, Mickey Rooney, just to name a few.
Tim was the pep band director at Saint Joseph's University for 28 years, the drummer innthe house band at the Three Little Bakers dinner theatre for 30 years.
He spends his time now teaching at Music and Arts, where he has been a Master Drum instructor for 25 years. His performance schedule is with Debby Boone, the Diamonds, and Splish Splash, the music of Bobby Darin. Locally his Tim Laushey Orchestra, jazz quartet, and New Orleans style jazz band fill in open dates.