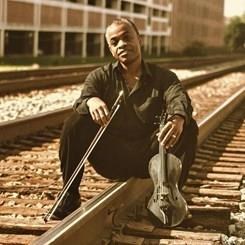 Russell Graham
Music Teacher, Master
Location: Olney, MD
Speaks: English
Instructs: Viola, Violin
Education: M.A. Berklee College of Music
Performance Experience: Freelance musician in DC metropolitan area since 1998 Soulful Symphony Umoja String Quartet Rockville Strings Pop Trio
Teaching Experience: DC Public Schools 2010-2015, Private instruction since 2008, Violin, Viola & Trombone at Instructor at Victor Litz Music Center since 2010, Music & Arts Violin and Viola Instructor since 2017
Teaching Philosophy: I subscribe to the general philosophy of the Suzuki Method of teaching, in that I believe if given the proper instruction combined with a commensurate effort from the student, everyone can come to learn to play an instrument. Accordingly, I am a very patient teacher and try to keep a light-hearted focus on the music at hand. During my lessons, my students and I laugh together but work together to get the job done.
Book Now

Get to know Russell Graham

Russell Graham is a violinist and guitarist who lives in Montgomery Village, Maryland. He’s been here for ten years, and enjoys the vibrant cultural scene that comes with living in the DC metropolitan area.

A graduate of the Berklee College of Music, he performs a diverse of musical styles including classical, jazz, pop, folk , and bluegrass. He has performed as a freelance violinist with several different ensembles in the area including the Umoja Quartet and the Soulful Symphony which featured performances with Wynton Marsalis, Donnie Mcclurkin, Donald Lawrence, Ledisi, Ruben Studdard, and Vanessa Bell Armstrong among others.

He was active in the Artist Outreach program sponsored by the Baltimore Symphony Orchestra and the similar enterprise sponsored by the Washington Performing Arts. He taught at the Fillmore East Arts program with the DC public schools for a number of years and now teaches privately in Montgomery County, Maryland.

Russell has traveled with different musical ensembles to and Germany, France, England, The Netherlands and Japan. He is currently guitarist with the Mass Choir at Goshen United Methodist Church in Gaithersburg.

He is having a great time as an artist on the roster of Bialek’s Music, as violinist with the innovative pop trio, Rockville Strings and as a solo artist.