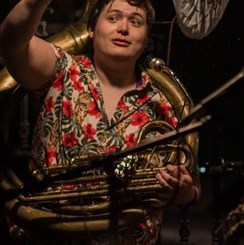 Max Mensing
Music Teacher, Expert
Location: Charlotte, NC
Speaks: English
Instructs: Baritone, French Horn, Trombone, Trumpet, Tuba
Education: Bachelor of Music in Education, UNCP 2017
Performance Experience: I have played in the UNCP Concert Band, Wind Ensemble, Tuba/Euphonium Ensemble and Jazz ensemble where I played with Allen Vizutti, Oystein Baadsvik, Jeff Coffin and Steve Wiest. Since leaving college, I've played in the Charlotte Tuba Euph Ensemble, Charlotte Concert Band and currently play in a local Party Band called Delia Few.
Teaching Experience: Band Director for CMS 2017-2019, Private lessons 2015-, I have been teaching privately with Music and Arts since 2017
Teaching Philosophy: If you can sing it, you can play it! Anyone can learn and master vocal technique, which is what brass technique is based on. I teach my students how to sing so they can play!
Book Now

Get to know Max Mensing

I am Max, and I have been teaching here at the Music & Arts since November 2017. I teach because I love the one on one experience of private lessons. That's where you really see kids get it because they get the individualized attention they need to grow. Music has been my whole life since middle school. It has given me experiences I wouldn't have gotten otherwise and friends I wouldn't trade for the world. Teaching gives me an opportunity to help encourage students along their walk as a musician, that they may share in these things as well.

When in lessons, it is important to fully understand the affect breathing has on your tone. Working on "breathing gym" will help the player expand their lung capacity and control their breathing. For my more advanced players, we focus on arpeggios, sight reading, and solos; equipping them for auditions as well as developing mastery on their instrument.

My end goal with students is THEIR end goal. I work with each student to get a clear idea of what they want out of their playing and I give them exercises tailored to that and I push them based on what they want to do. If you have big goals in music, I'm gonna get you there!! For any questions or for more information, please reach out at: 704-341-0000.