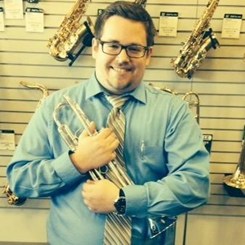 We are very excited to welcome Ian Kaufman to our incredible teaching staff. Ian is a fantastic and passionate teacher specializing in brass instruments, specifically trombone and trumpet.

Ian is originally from Poway, California and is a senior at Temple University’s Boyer College of Music in Philadelphia where he plays solo trombone in the top jazz ensemble under the direction of Terell Stafford and studys privately with Joe McDonough. He was exposed to jazz early on by his middle school teacher, Dr. Ella Steinberg, and began to play jazz all around the community, even playing with the University of San Diego Jazz Ensemble at the age of 13.

With the Temple Big Band, Ian has played at venues such as the Kimmel Center for the Performing Arts and several of Lincoln Center’s stages including Dizzy’s Coca Cola Club, Appel Room, and Alice Tully Hall. Ian has performed 3 years with the Mid-Atlantic Collegiate Jazz Orchestra at the Mid-Atlantic Jazz Festival and the Kennedy Center for the Performing Arts under the direction of Delfeayo Marsalis in 2017, Warren Wolf in 2018, and Brian Lynch in 2019. In 2018 Ian was chosen as one of only eleven winners of the very highly competitive Yamaha Young Performing Artists Competition, where he played for an audience of over 2,000 people in Indianapolis. Outside of school, Ian is teaching trombone and playing at some of the best venues in Philadelphia and the surrounding area as a freelance trombonist including BVT Live!’s Big Ric Rising Wedding Band and several other groups of a wide variety of styles. Ian will begin his masters in jazz performance at Temple in January of 2020.

If you would like to set up lessons with Ian please send us a request through the website or give us a call at 215.230.3300.