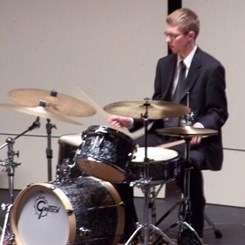 Aaron Ewing is a Brooklyn based drummer, percussionist, and composer. He has
been playing for 19 years, and teaching for 13 years. Aaron has performed at
many prestigious venues throughout New York, including Lincoln Center, Citi
Field, and the Blue Note. He has performed with jazz artists Lenny Pickett
(Saturday Night Live bandleader), Joe Lovano, Brian Lynch, Kenny Werner, Ralph
Alessi, George Garzone, Jean-Michel Pilc, and many others. Aaron also regularly
performs for musical theatre productions, and is well-versed in many styles of
music.

He has appeared on a number on recordings, including a
critically-acclaimed album by jazz trio Reed's Bass Drum. The trio toured the
East Coast and Midwest, and their album, Which is Which, received positive
reviews from TimeOut New York, Jazz Times, and Jazz Inside Magazine. Recently,
Aaron has been performing with ShoutHouse, a 15-piece new music ensemble that
borrows from contemporary classical music, hip-hop, and jazz. ShoutHouse will
release it's debut album this fall.

Aaron grew up in Fort Smith,
Arkansas, and honed his skills in the diverse music scene there. His talents
have been recognized through awards from the North Arkansas Jazz Society, the
Fort Smith Riverfront Blues Society, and Music Fort Smith. In 2005, he was
selected to perform with the Collegiate All-Star Jazz Ensemble at the IAJE South
Central Regional Conference. Aaron received a B.A. in Music from the University
of Arkansas - Fort Smith, and an M.A. in Jazz Performance and Composition from
New York University, where he also served on the faculty. He has studied with
Grammy Award-winning drummer Antonio Sanchez, and renowned jazz drummer Billy
Drummond.