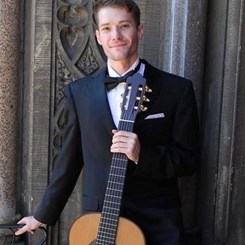 Brian Streckfus received his Bachelor’s degree in Classical Guitar Performance from the Peabody Conservatory of the Johns Hopkins University. There, he studied with Ray Chester, who chairs the guitar department at Peabody Conservatory and is one of the world’s leading guitarists. In addition, he has also studied with other notable pedagogues including classical guitarists Serap Bastepe-Gray, Julian Gray and James Hontz, as well as jazz guitarists Brian Kooken and Vincent Corson.

In addition to guitar, Mr. Streckfus has long-standing interests in numerous music topics, including music theory, music history, ear-training, bass, ukulele and piano. He also has a love for music technology, and his knowledge of music equipment in general is invaluable for an aspiring guitarist. He often incorporates and explains effects, metronomes that sound like real drummers, chord detection programs and interactive games that help students develop the necessary fundamentals to become successful musicians.

Brian Streckfus started music at age 9, playing percussion on a snare drum. Soon after, he started playing on a full drum set and taking private lessons. After playing various orchestral percussion instruments in middle school band, he discovered guitar at the age of fifteen, playing tabs of his favorite songs and jamming with friends.

The new-found interest in guitar and in music became a turning point in his life. He quickly developed a love for music, and was inspired to enroll in three years of guitar and music theory, extra-curricular jazz band and private lessons in high school.

One major reason Mr. Streckfus continued with music is because his grades improved dramatically the year he really got into music. He thinks that music gave him a purpose that he wouldn’t otherwise have had. “That’s one of many reasons,” Streckfus says, “that music lessons should be available to everyone.”

Shortly after that, Mr. Streckfus studied classical and jazz guitar in college, played in jazz big bands for a total of three years, and continued to collaborate with musicians in diverse genres and styles, acquiring extensive ensemble experience both in and out of school. In addition, he has performed jazz, popular and classical genres at numerous Maryland music venues. These include Baltimore’s Lyric Opera House, Miriam A Friedberg Concert hall, Towson’s Recher Theatre, Fret Fest at Goodwin Hall, the Cohen Davison Family Theatre, Fallston Hall and Fletcher’s.

More than anything, Brian Streckfus is motivated by a desire to give back to the music community, to keep the art of music alive and available, and to improve music pedagogy by incorporating technology.  It isn’t unusual for to him work on and teach rock music, electronic music, improvisation, Indian ragas, and classical music on the same day. The versatility of his chosen instrument, and the sense that there is always something new and exciting around the next corner, is what he believes keeps his students coming back for more.