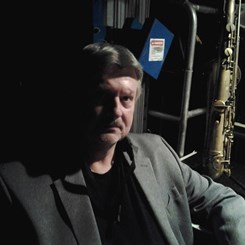 Bruce Swaim started playing clarinet in the 4th grade, saxophone in the 8th grade and flute in the 10th grade.

Bruce studied at the University of North Carolina at Greensboro as a BA performance major in saxophone with a minor in flute. He also studied with acclaimed saxophonist James Houlik.

Moving from North Carolina to Washington, D.C., Bruce was given the opportunity to work professionally with many notables including Keter Betts, Carl Allen, Danny Gatton, Rosemary Clooney, Martha Reeves, Millie Jackson, The Spinners, Michael Feinstein, Ronnie Wells, Dick Morgan, Houston Person, The Four Tops, The Temptations and many others.
He is an active studio musician with many independent pop, jazz and blues recording projects along with numerous film, T.V. soundtracks and jingles. Bruce is an accomplished musical composer in addition to scoring horn charts for studio and live performances for other musicians.

His performance credits and venues include BET, The Millennium Stage at The Kennedy Center, Blues Alley, Wolf Trap, DAR Constitution Hall, Strathmore, The Ramshead, The National Gallery of Art, The White House, and Lincoln Center to name a few. Bruce has received two Wammy Awards for Jazz Instrumentalist of the Year from the Washington Area Music Association.

He has appeared on over 40 recordings including 4 with his own group.

Bruce has been teaching privately for over 20 years including time at St Andrews Episcopal School in Bethesda and The Friends School in College Park. He is able to tailor a program for each student based on level, needs, and interests.