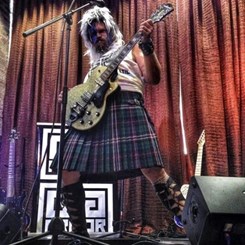 Dan Smith will teach you guitar!

Since getting my first Bontempi organ for Christmas at the age of 4, music has been a major part of daily life.  Playing trombone in the Willis (Texas) band program taught me the skills needed for successful practice habits and, more importantly, how to work with others.
Percussion, especially doumbek, became the next concentrated study.  It was an essential step in my education of music, taking rhythm down to it's purest form and learning to count not only in common times, but also many of the rarer signatures.  I went on to recieve awards from the Society for Creative Anachronism, including their Sable Thistle for art-excellence.
Guitar was a new tool to my hands at the age of 19.  The portability and versatility quickly brought it to daily practice; being a melody instrument, a harmony instrument, and a percussion instrument.  It could stand alone or as accompaniment and soon became my favorite as I learned to sing along.
I enrolled in the Music Therapy program and SHSU, and completed 27 hours towards a B.A..  While never receiving my degree, the theory and composition skills learned are essential to my understanding of music and still used daily in teaching lessons.
Stage Performance began with my co-founding the Natives are Restless... a regional jam-band that went on to a decade of moderate success.  Not only did the venture give me a chance to compose, it also allowed versatility of instrumentation.  The flute became a daily ritual, and even trombone made its way back into my hands.  I now perform weekly as a solo artist, in several local bands, and with the Shunyata bellydance show at the Texas Reniassance festival.