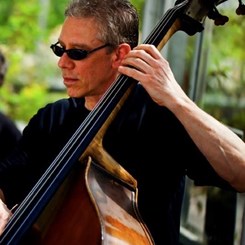 Dennis arrived in Seattle by way of Detroit and Los Angeles, and has

since performed, recorded, and toured with numerous Northwest groups,

covering a wide range of styles from classical to progressive/alternative

He received a degree in instrumental performance from the University of

Washington, graduating with top honors in 1995.

While at the U.W. he studied for three years with Barry Lieberman of the

L.A. Philharmonic and Seattle Symphony. He also performed with the U.W.

Symphony under the conductor Peter Eros, the University Strings under

William O. Smith and Stewart Dempster), as well as various other

He has since been performing with a number of Seattle area ensembles,

including the Octava Chamber Orchestra, the Bellevue and Federal Way

Composer's Collective, and the New Chamber Orchestra under violinist/

Dennis has recently performed and recorded several new works by

contemporary composers Byron Au Yong and Sumiko Sato, as well as the

and recorded with many other Northwest-based jazz, rock, world music,

and other diverse groups, including the Seattle Creative Music Orchestra,

One Hand Clapping, the Valse Cafe Orchestra, Opera Jupiter, and the