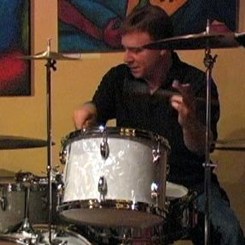 I like to teach drumset in a relaxed and fun style because I believe if a student enjoys the lessons then the hard work that it takes to learn music won't seem like such a chore.

I started playing drums at the very young age of 5 and took lessons from a local neighborhood teacher. By the age of 13 I decided that this is what I really wanted to do! I then studied drums from Steve Sacher who was a former student of the famous Chicago Drum "Guru" Roy Knapp. He was a very knowledgeable instructor and was hip to the new styles as well as the old and gave me a solid foundation to build the rest of my future studying upon. In 1971 at the age of 14 I began to study at the famous Chicago Drum School on Wabash Avenue in Downtown Chicago. What a great learning experience that was!! I studied under Ernie Gadzos who was a great drummer and instructor. Ernie taught me advanced techniques along with a musical approach to playing drumset. I continued to study there with Ernie for 4 years. In later years Ernie accepted a prominent Clinical Services position with the Gretsch Drum Company in Georgia. In 1973 while still studying at the Chicago Drum School I decided to tryout to become a member of The Chicago Federation of Musicians Union and passed the test and was accepted at age 15. I then began to work as a professional musician performing locally in all types of musical situations. In 1976 I was accepted to study with world famous percussionist Bobby Christian. Bobby also was a former student of the famous Chicago Drum "Guru" Roy Knapp. Bobby performed with many big name stars, was a guest performer for Symphony Orchestras around the world, was a first call studio musician, a staff musician for Chicago radio and television stations and was a Clinician for The Ludwig Drum Company. The instruction I received from Bobby Christian was exactly what I needed to be a truly accomplished drummer, musician and instructor. While studying with Bobby I continued performing both locally and on the road. Some of the venues and locations include The Newport in Miami Beach, The Aladdin Hotel in Las Vegas, Caesar's in Atlantic City, New Jersey, The Bop-Shop in Chicago, Joe's Be-Bop Cafe on Navy Pier in Chicago, Green Dolphin Street in Chicago, Frankie's Blue Room in Naperville, Fitzgerald's in Berwyn, numerous Clubs, Restaurants, Festivals and Concerts in the Parks in Chicago and the surrounding Suburbs and the Midwest. After 40+ years of performing I'm happy to say I'm still at it!!

My first teaching job was in 1977 at Glendale Music Center in Glendale Heights, IL. I taught there for a couple years and when my performance schedule became too busy I decided to leave and start to teach privately in my home and student's homes so I would have a more flexible teaching schedule to accommodate my performance schedules. I continued to teach privately for 35 years and I am proud to say that with all my experience as a performer and instructor I can teach all ages, all levels and all styles. I also contributed to the educational world of drumming with articles published in the Jazz Drummer's Workshop section of Modern Drummer Magazine on the Stick-Shot technique and on the style and analysis of the famous jazz drummer Shelly Manne.

I believe in teaching solid fundamentals, proper technique and good music sight reading skills so that the student gets a great foundation and all-around education to be taken with them in what ever direction they want to go in. Some of the method books I use are as follows: Alfred's Drum Method Book 1, Alfred's Beginner Drumset Method, Stick Control, Accents and Rebounds, Master Studies, Charley Wilcoxon Rudimental Solos, Syncopation, Advanced Independance Techniques for the Modern Drummer, Rudimental Jazz, The Art of Bop Drumming, Bop and Beyond, The New Breed, Realistic Rock, Mini-Monster Book of Rock Drumming, Joe Franco's Double Bass Drumming, Mike Clark's Funk Drumming, The Total Blues Drummer, and The Art of Latin Drumset. In addition to these methods I like to teach my own exercise and technique ideas that I've developed from my studies and 40+ years of performing.