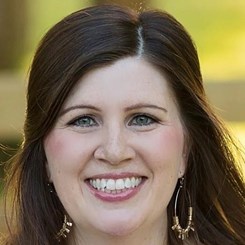 Bachelor of Arts in Music Education and Performance

Mrs. Grace Bennington is a 2003 graduate of Elon University. She graduated with honors and earned a Bachelor of Music Degree in Music Education and Performance. While at Elon, Grace studied flute with Linda Cykert and received multiple opportunities to play at outside gigs. Grace was a member of the Elon Universirty Wind Ensemble, Orchestra, Marching Band, Flute Choir, Jazz Band, and Pit Orchestra.

During the summer of 2005, Grace accepted a position at Woodlawn Middle School, where she taught from 2005-2018. The Woodlawn Seventh and Eighth Grade Combined Bands received numerous Excellent and Superior ratings during her tenure at Woodlawn. Her students also consistently received top spots in All County Band. Grace had the great privilege of inspiring numerous middle school band students to pursue degrees in music education. Grace had a high school student intern every spring during her tenure at Woodlawn. Grace also had numerous Elon University Music Student Interns and a student teacher.

Grace has been a private flute instructor since 2001. Grace's students have competed for and been accepted into numerous All County, District, and Honors Bands. Numerous students have also gone on to pursue Music Education and Performance Degrees in Universities across the state of NC.

Grace has a passion for teaching. Students under her instruction perform at high levels due to the positive raport built between student and teacher. Grace has a knack for identifying and building on her student's strengths and weaknesses. She is able to meet each student's individualized learning needs by using a wide variety of teaching methods, exacuting a lot of patience, and creating a warm and positive environment in which to learn. Grace believes that any student can succed as long as they are willing to put forth the effort to learn and maintain a consistent practice routine.

Currently, Grace maintains an active performance schedule performing at area churches, weddings, funerals, and other events. Grace also conducts flute master classes at area middle and high schools. In the Summer of 2018 after the birth of her twins, Grace resigned from her position at Woodlawn. Grace and her husband Patrick, the band director at Western Middle, live in Burlington with their sons Jesse and Michael, and daughter Evelyn.