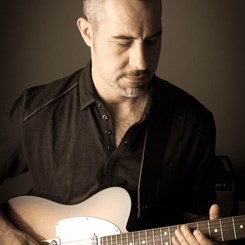 Born in Washington, DC and residing in the Metro area, Jesse Daumit is an acoustic and electric guitarist, recording artist, composer and music instructor.

Jesse first picked up the guitar at age 19 while he was attending Montgomery college. A year later he auditioned and became a music major. Two years later, he was performing and teaching music lessons professionally.

After graduating with an AA degree in classical and jazz guitar, Jesse moved out to Hollywood, California and worked as a recording artist in the film and television industry during the day, while performing in the L.A. area rock and jazz club scene at night.

Missing the east coast music scene, Jesse decided to move back to Maryland to pursue his BA in Classical and Jazz guitar performance at Towson University. While attending Towson, he had the opportunity to study and perform with many of the region's most accomplished musicians.

With his ability to play many styles of music including jazz, classical, rock, blues and latin, Jesse has played in almost every major Baltimore and D.C. venue. Due to the versatility and respect he has gained as a musician, Jesse has performed and recorded extensively throughout the east coast and in numerous countries worldwide such as Spain, Germany, Egypt and others.

Having played the instrument most of his life, he has had the opportunity to work with such notable acts as The Roots, Los Lobos, Levon Helm, The P-Funk All Stars, and Jim Belushi to name a few.

As an educator, Jesse has had many years to perfect his teaching method. Several of his students have received scholarships to prestigious music schools such as Peabody Conservatory and the Berkley School of Music, and gone on to become successful musicians in their own rite. Although Jesse is an in-demand teacher for many of the area's advanced musicians, his music lessons are tailored to suit each student's individual goals and needs. He is equally adept at teaching both advanced and beginning students of all ages.