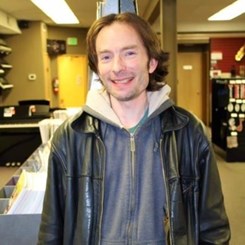 JOSHUA ZIMMERMAN is thrilled to be instructing at Music and Arts!  He has previously worked as Music Director, rehearsal pianist, instructor, arranger, and accompanist, and performed on piano, keyboards, guitar, banjo, bass, percussion, and voice, for many prestigious local companies, including Village Theater, Seattle Musical Theater, Second Story Rep, Renton Civic Theatre, STAGEright, ArtsWest, Lakewood Playhouse, and Taproot, among many others. He was the recipient of the prestigious "Gypsy Rose Lee" award for outstanding musical direction of a non-equity musical, chosen by the Seattle Theater Writers, in 2012. He was interim conductor for the Issaquah Philharmonic 2011-2013, performs regularly with the Everett Philharmonic Orchestra. He has been teaching private lessons for almost 25 years, most recently at the Gene Nastri School for the Arts and Everett Community College.

He teaches here on Tuesdays and Wednesdays!