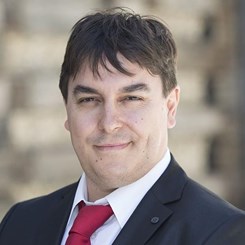 You don't do anything; you just let it evolve. S.Celibidache

Go forth and set the world on fire. Francis Assisi

Dr. Juan Gallastegui is a Spanish conductor and scholar residing in the United States. During the 2016-2017 he conducted the Loudoun Symphony Orchestra (Ashburn, VA) during their Christmas concert and a regular season classical concert, as well as a concert for the Pro Arte Chamber Orchestra of Greater Washington D.C. as one of the conductor finalists. He is currently the Director of Bands at Archbishop Carroll High School in Washington D.C.

Prior to coming to the States, Dr. Gallastegui conducted concerts with the Huelva Municipal Wind Orchestra in Huelva, Spain and "Camerata Antonio Soler" in Madrid. He was a Co-founder of “Castro Urdiales Municipal Wind Band,” a nonprofit music association in his hometown Castro-Urdiales, Spain, with forty musicians and the town hall´s music school, also serving as Board Member, Music Librarian, and Treasurer.

Dr. Gallastegui has an outstanding performance history as a euphonium player, playing principal and soloist for several wind bands in Spain. He was also a participant in concerts with the New York Philharmonic Principal Brass Festival and New York Wind Symphony. He formerly served as a Brass and Musicianship Instructor at Bard College Preparatory Division and as a Brass Specialist at Red Hook High School, both in NY. He was a Music Teacher in Castro-Urdiales.