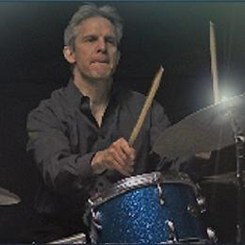 Ken’s teaching experience spans over 30 years. A strong foundation of the basics and fundamentals are the core of his instruction. He specializes in teaching rock, double bass, jazz, latin, odd meters, polyrhytms, hand technique and Breading. Annually he presents drum clinics and student recitals. His summer DRUM CAMP programs have proven very successful. They feature such drum set styles as rock, jazz, latin and world music, as well as percussion ensemble and drum line.
Students perform with a live band at some of the camps.

Ken is the author of six drum method and solo books including: DRUM SET UNLIMITED, MELODIC SOLO ENCOUNTERS FOR DRUM SET, THE CREATIVE ROCK DRUMMER VOLUMES I & II, BASS BUSTERS (Double Bass Method) and STICKING METHOD FOR TODAY’S DRUMMER. His articles have appeared in MODERN DRUMMER MAGAZINE, FOR DRUM INSTRUCTORS ONLY and THE CREATIVE DRUMMER MAGAZINE.

Armand Santarelli and William Schinstine are two well known drummers/teachers and authors that Ken studied with. Both were very influential to Ken as a teacher and performer. He also studied at Drummer’s Collective in New York City and participated in percussion and jazz symposiums at the University of Miami from 1971-1975.

Ken currently performs and records with a variety of Rock, Jazz , Irish bands in the Philadelphia area.
Some of the bands he has performed with include: Side FX, The Nerve, The Junkyard Band, The Donnie Allen Band, The Project Big Band, Jellyroll, The Sixth Street Quarternion, Big Band Theory and Mary Beth & Friends.

Many of Ken’s former students have moved on to successful careers such as composing scores for TV and Film and touring and recording with National Acts. One has been a member of The Blue Man Group over 10 years. Many are respected instructors.