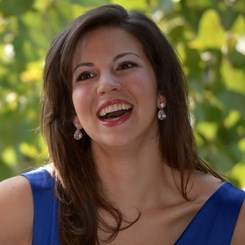 Soprano Lauren Frey is a graduate of Westminster Choir College (B.M. in Voice Performance; M.M. is Voice Performance and Pedagogy). She has been teaching voice and piano for 13 years to ages 5+. She is comfortable working with a variety of levels, ages, and musical styles. Lauren has studied with some of the country’s leading teachers and coaches from prestigious institutions, such as The Metropolitan Opera, New York City Opera, Opera Philadelphia, Westminster Choir College, and Juilliard. She is passionate about passing the traditions and teachings of these mentors onto her students.

An active performer domestically and abroad, she has just returned from Opera Steamboat, debuting the role of Foreign Princess in Rusalka. She debuted with the company last summer as Donna Anna in Don Giovanni. In 2018, she sang the role of Violetta in La Traviata with St. Petersburg Opera. In 2017, she returned to La Contessa (Le nozze di Figaro) with New York Lyric Opera after having made her NYC debut with the role in 2015. She sang her first Konstanze (Die Entführung aus dem Serail) in 2016 and Musetta (La Boheme) in 2015. Lauren debuted with New York City Opera in 2016 and made her international debut in 2013.

Lauren was recently a finalist with the Internationale Rubenstein Competition in Düsseldorf, Germany. She received 2nd Place with The American Prize Competition and been a semi- finalist with the Annapolis Voice Competition. In 2015, she was a semi-finalist with Brava! Opera Theater James M. Collier Vocal Competition. Lauren won the prestigious Career Bridges Grant and 3rd Place in the Metropolitan Opera National Council Regional Auditions in 2014. She received an Honorable Mention Award with the Philadelphia Orchestra's Albert M. Greenfield Competition and won the MONC District Auditions in 2012. In addition to her work as a voice/piano teacher, Lauren is a certified TESOL ELS (English as Second Language) teacher. This gives her the knowledge and tools to discuss proper pronunciation, diction, articulation, and production. She is comfortable working in English, Italian, Spanish, Latin, German, French, Russian, and Czech.

In addition to working with singers, Lauren has also helped clients, like teachers and news anchors, develop a healthy and well-produced speaking voice. For more info and examples of Lauren’s performing, please visit http://www.laurenfreysoprano.com/.