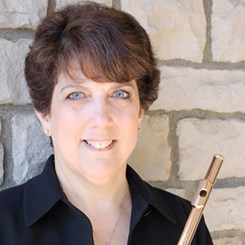 Leslie teaches Flute at the Hilliard location of Music & Arts.  She has a D.M.A. in Flute Performance from the Ohio State University.  She is also the Affiliate Studio Instructor of Flute and Chamber Music at Denison University as well as the director of the Flute Ensemble at Denison University.  Leslie is the Principal Flutist of the Newark-Granville Symphony Orchestra where she also serves as Education Director.  Leslie just returned from touring China where she gave flute master classes and performed at the Shenyang Conservatory of Music and the Delian Conservatory of Music.

Dr. Maaser currently performs with the Rococoa Wind Quintet, Trio Villanella, and Ohio Capital Winds.  She has performed with many other orchestras including Opera Project Columbus,  Columbus Symphony, Columbus Bach Ensemble, Opera Columbus Light Opera, and Westerville Symphony.   Leslie has also performed with the Opera Theatre of Rochester (NY), Madison (WI) Symphony Orchestra, Wisconsin Chamber Orchestra, the Rome Festival Orchestra, and the East Lansing Opera Company.  She has served as a guest artist and featured clinician throughout the United States.  Dr. Maaser was an outstanding D.M.A. dissertation award winner and presenter at the National Flute Convention.  She holds a Doctor of Musical Arts degree in flute performance from The Ohio State University.  As a fellowship recipient, she earned her Master of Music degree from the University of Wisconsin in Madison, and her Bachelor of Music degree from Michigan State University.