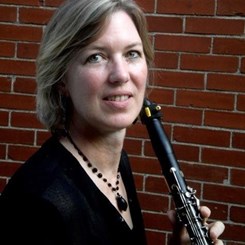 Marilyn Nije graduated from Indiana University with a Bachelor of Music Eduacation, a Master of Music in Performance from Manhattan School of Music and a performance certificate from the Sweelinck Conservatory in Amsterdam, Holland where she studied with George Pieterson from the Concertgebouworkest.

She was Assistant/Eb Clarinet in the Mexico City Philharmonic for almost 20 years. Since 2009, she has lived in Louisville and is first call clarinet/Eb clarinet wih the Louisville Orchestra. She is also a contracted 2nd clarinetist with the Orchestra of Kentucky in Bowling Green as well as extra clarinet with the Indianapolis and Owensboro Symphonies.

She is Adjunct Professor of Clarinet at Bellarmine University and Western Kentucky University. She has had one to two year teaching positions at the University of Louisville and Campbellsville Univerities.

She is a founding member of Sinfonietta Ventus, a woodwind octet based in Mexico City and the NouLou Chamber Players here in Louisville.  Marilyn has recorded under the direction of Carlos Miguel Prieto, Jorge Mester, Eduardo Mata and Teddy Abrams.

As a member of Sinfonietta Ventus and the Mexico City Philharmonic, Marilyn has toured extensively in Europe, Mexico, China, Colombia and the United States.