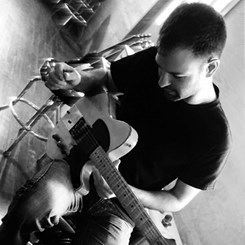 Like many aspiring musicians, Michael began playing early in life, and then pursued music in college. While studying music theory and arranging at the University of Maine, Michael developed an interest in composition, and spent a great deal of time writing music, further developing his compositional style. It was during this time that he also learned to play drums, piano, and bass guitar to aid in his understanding of how to write for other instruments.

Following his time spent studying in Maine, Michael studied audio production for music and film, at the Audio Recording Technology Institute in Orlando, FL, and interned with world-renowned mastering engineer Bob Katz. He currently works as a freelance audio engineer in CT, and has been involved as a writer, performer, and engineer for a number of commercial projects. In addition to his production and songwriting work, Michael has also worked as a music educator since 2011. Michael's experience and education as a musician, songwriter, and audio engineer gives him a unique perspective and he is devoted to helping others find their musical voice.