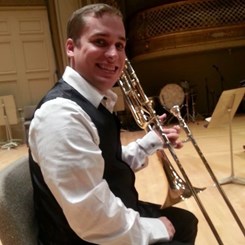 Hi there! My name is Nate Rensink, I have been playing trombone for 20 years and Euphonium for about 10. I graduated in 2011 with my Undergrad and in 2013 with a Master's degree in Trombone from SUNY Purchase where I studied with members of the Metropolitan Opera Orchestra. Before that, I studied in Montreal with members of the Montreal Symphony. Music has taken me all over the world; from studying in Canada, to performing in Austria and the French Riviera. I have shared the stage in performances with members of the Boston Symphony, the Cleveland Orchestra, the Montreal Symphony Orchestra, the New York Philharmonic and the Royal Concertgebouw Orchestra. I have been a featured soloist with the Princeton Brass Band and the West Point Band.

Currently I teach Bass Trombone, Euphonium and Tenor trombone, and work with several ensembles in the Hudson Valley/ North Jersey area. Some of them include: The Adelphi Orchestra, The Greater Newburgh Symphony Orchestra, Mid-Atlantic Opera, the New Jersey Wind Symphony, the Northern Duchess Symphony Orchestra and the Princeton Brass Band.

During my own studies, I found a passion for teaching music to others. Music has given me many things: from performing opportunities on some of the world's greatest stages, to some of my closest friendships. Through teaching, I can give back and hopefully inspire others to learn what music can bring to them.