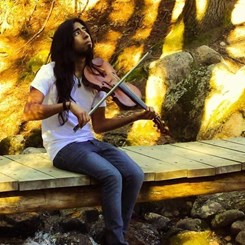 "I dwell in Possibility"

Peter Jay and the Metrowest Symphony Orchestra in Natick-MA

Currently working on my new album "Dear Self", A method for Violists wanting to learn how to play fiddle music

B.M. in Violin/Viola from Berklee College of Music, M.A. in Traditional Scottish Music from the Royal Conservatoire of Scotland

Favorite to play and listen to areViolin and Lever Harp

Teaching Violin since I was 14, Taught High School orchestra Sectionals for three years

Peter Jay graduated from Berklee College of Music with a Bachelor of Music in Violin and Viola Performance. Although classically trained from the age of 6, Peter Jay spent his time at Berklee learning various types of Folk music and Contemporary Classical music.  He has studied under Dr. David Wallace, Maeve Gilchrist, and world-renowned Old-Time Fiddler, Bruce Molsky.

Peter Jay continued his education at the Royal Conservatiore of Scotland, in Glasgow, UK, where he earned a Master's degree in Traditional Scottish Music. He was fortunate enough to study with Marie Fielding and Alistair McCulloch, as well as have some Scots Gaelic tutoring from Iseabail MacDonald.

Peter Jay has played in Boston Symphony Hall in Berklee Contemporary Symphony Orchestra, as a member of Chinese Pop icon, Leehom Wang’s orchestra, and under the baton of Arnie Roth for Final Fantasy: Distant Worlds. Peter Jay has also run a Handbell Choir and Vocal Choir, as well as taught violin, viola, and cello sectionals for Desert Ridge High School in Arizona.

“As a fiddler, I use my bow in a completely different manner—in an opposite manner, if you will, than a classical player. I'm able to sing and play at the same time. I'm able to learn and teach about improvisation. Especially as a violinist, improvisation is extremely important. Many pop-country artists, like Carrie Underwood, have a violinist as a permanent band member. These fiddlers, often times, have to improvise a solo and make it sound as authentic as possible…”

Peter Jay believes that, not only does folk music teach a completely different set of rules than classical music, but also, with the right presentation, could become the forefront of pop music.