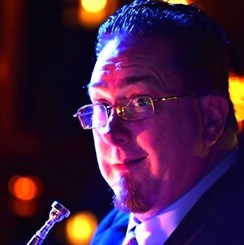 Is your student in high school band and can’t play a high C yet?? Does he/she have problems with sore lips, notes that won’t come in, or is he/she getting lip injuries?


Phil Norris has been teaching trumpet since 1983. He teaches the physical side of the trumpet as well as the musical side.  The trumpet, being one of the most physically grueling instruments, demands this.  He gives a customized routine for the student to do at home and he also helps with those who are having embouchure problems, whether they’ve developed a bad habit or have had to deal with braces.

On the musical side, Phil teaches jazz improv, big band lead, how to play in a rock horn section, and even classical style. Of course reading music and helping with the student’s school material is also focused on.

He takes everyone from ages 10-75 no matter what their level.  If your student is willing to put Phil’s routine to work daily, he/she will achieve great results.

An accomplished professional player who started himself in 1968 in his school band program, Phil came up playing in band all through his scholastic career, which included the “Big Brown Music Machine” at Cal State Long Beach. Add to this the youth bands and drum and bugle corps he grew up with, he is all too familiar with the requirements that local school bands want from students.  He studied trumpet with several teachers but stayed for twenty-four years with Bob Valle.  Bob, an accomplished player/soloist and former twelve-year veteran Claude Gordon student, taught him all about how the trumpet embouchure really worked and all about the “physical approach” to playing.

As a professional player, Phil is in demand with many bands in the LA, OC and IE area and plays various California venues from Palm Springs to San Diego to San Francisco, not to mention out of state events in New York, Chicago, Reno and Las Vegas.   He’s backed acts as the Drifters, Coasters, Freda Payne, Ink Spots, the Platters, the Shirelles, the Temptations, David Foster and John Tesh.  He’s also played principal trumpet for many pit orchestra gigs for musicals such as “Annie”, “No No Nannette”, “Anything Goes”, and “Chicago”,etc.  He is currently a performer and soloist with Zoot Suit Revue, Platinum Groove and “Colour My World” a tribute to Chicago.  Phil was also a herald/fanfare trumpeter in the 1984 Los Angeles Olympic Opening Ceremonies.