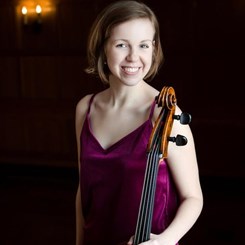 Ms. Lemna was named the Gold Medal Winner of the Collegiate Division of the Cleveland Cello Society Competition in 2015 as well as a winner in the 2016 Cleveland Institute of Music Concerto Competition. In addition, she has received honorable marks in numerous competitions, including the Heida Hermanns International String Competition and the Founders Division of the Mondavi National Young Artists Competition. Ms. Lemna was a recipient of the Marine Corps’ “Semper Fidelis” Award for Musical Excellence in 2013 and was presented the award by an active marine. In addition to solo training, intensive quartet study at the Cleveland Institute of Music led Ms. Lemna to be invited as a member of the fellowship quartet at the Brevard Music Festival during the summer of 2015.

In 2018, Ms. Lemna received a Professional Development Committee Grant from the Eastman School of Music and presented her paper, “Strategizing the Female Body: Charlotte Moorman’s Sky Kiss,”at the AMS NYSSL Chapter Meeting at SUNY Fredonia School of Music. She was also invited to present her paper, “Incorporating Organic Hearing into a Young Musician’s Education,” at Cleveland Institute of Music’s Music Theory Colloquium in 2017.

Ms. Lemna has attended multiple music festivals including the Heifetz International Music Institute, Bowdoin International Music Festival, the Sitka Cello Seminar, and the Meadowmount School of Music. She has had the honor to perform in master classes for notable musicians such as Zuill Bailey, Amy Barston, Andrew Jennings, Peter Salaff, Wendy Warner, Donald Weilerstein, as well as members of the Cleveland Quartet, Cavani Quartet, and prestigious symphony orchestras.

A native of Wheaton, Illinois, Ms. Lemna began her cello studies at the age of 4 through the Community School of the Arts Suzuki program at Wheaton College. Her past teachers have included Catherine Kuna, Carol Ourada, Dr. Melissa Kraut, Steven Doane and Rosemary Elliott. Ms. Lemna received her Master Degree in Cello Performance and Literature at the Eastman School of Music and her Bachelor Degree in Cello Performance and Music Theory at the Cleveland Institute of Music where she also earned minors in Dalcroze Eurhythmics and Suzuki Pedagogy. Through her studies, she has become a fully-registered Suzuki cello teacher under Suzuki teacher trainers Ms. Pamela Devenport and Ms. Abbey Hansen. Ms. Lemna currently plays a 1989 Lawrence Furse cello.