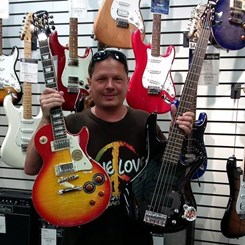 Rick’s original musical instrument is drums. He began playing at the age of four.

He traded his drum set for guitar in high school after seeing his favorite rock band, KISS, live in concert. After several (so- called rock star) hair bands, Rick joined the band Toyz, performing on the Top 40 circuit full-time. In 1992, he joined Clay Hunt’s Pure Delite and worked with the band for 15 years.

Rick has attended Peabody, Essex, and Towson State University, majoring in jazz and classical guitar. In 1993, he began his teaching career at Music and Arts Center. One of his greatest experiences came when he was able to see the product of his teaching. His student, Billy Martin, signed a major recording contract with the band, Good Charlotte, who toured the world, performing on MTV, talk shows and pop radio. Another product of Rick's teaching ability is Dru Decaro, who is currently on tour with Grammy-Nominated RnB star, and Soul Train artist of the Year, Miguel.

Rick has written and recorded numerous songs for local artists in the rock, country, and pop fields. Rick is in his 20th year as a teacher at Music and Arts Center, and performs in a duet named Rick and Regina. He feels blessed waking up each morning, realizing that he is able to do what he truly enjoys-making music for a living.