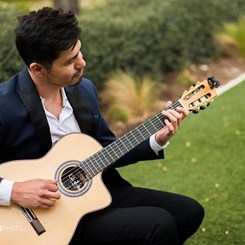 I've always loved the quote by Jules Combarieu: "Music is the art of thinking with sounds."

AA from San Antonio College, BA-Music from University of Texas at San Antonio, Studied classical and jazz with prominant professors and musicians from all over the world, Studied latin afro-cuban music abroad in Puerto Rico and in the states with fine Cuban and Puerto Rican musicians

Over 14 years of teaching experience