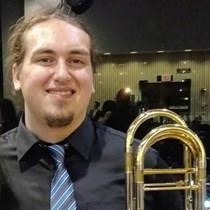 Get to know Sean Selinske

Sean Selinske is a trombonist from Rockland County, NY.  He has played professionally since 2013 with several groups, most notably the Tappan Zee Bridgemen. Sean attended the Crane School of Music in Potsdam, NY, where he developed a love and appreciation for performing classical music and jazz.

In 2017, as a member of the Latin Jazz Ensemble at the Crane School, Sean traveled to Cienfuegos, Cuba to participate in a cultural exchange program and learn from the masters of Afro-Cuban music. Soon thereafter, he graduated from the Crane School with a Bachelor of Music degree.